Halong Bay is a body of water of approximately 1,500 square kilometres in north Vietnam with a 120 kilometre coastline, in the Gulf of Tonkin Gulf of Tonkin near the border with China, and 170 kilometres east of hanoi. Ha Long Bay – means “Bay of the Descending Dragon” in the Vietnamese language. 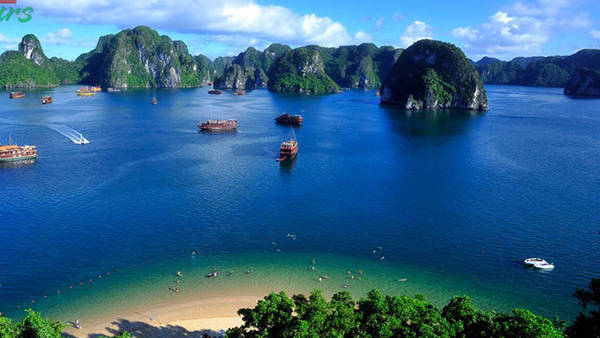 The bay consists of a dense cluster of 3000 limestone monolithic islands, each topped with thick jungle vegetation, which rise spectacularly from the ocean. Several of the islands are hollow, with enormous caves. Hang Dau Go (Wooden stakes Cave) is the largest grotto in the Halong area. French tourists visited in the late 19th century, and named the cave Grotte des Merveilles. Its three large chambers contain large numerous stalactites and stalagmites (as well as 19th century French graffiti).

Some of the islands support floating villages of fishermen, who ply the shallow waters for 200 species of fish and 450 different kinds of mollusks. Many of the islands have acquired their names as a result of interpretation of their unusual shapes: such names include Voi Islet (elephant), Ga Choi Islet (fighting cock), and Mai Nha Islet (roof). 989 of the islands have been given names. Birds and animals including bantams, antelopes, monkeys, and iguanas also live on some of the islands.

The bay was World Heritage listed by UNESCO at the 18th meeting of the Committee of the World Heritages of UNESCO (in Thailand on December 17th, 1994). It is one of viet nam‘s most popular tourist destinations.

Halong Bay has been the setting for local naval battles against Vietnam’s coastal neighbours. On three occasions in the labyrinth of channels between the islands the Vietnamese army stopped the Chinese from landing. In 1288 General Tran Hung Dao stopped Mongol ships from sailing up the nearby Bach Dang River by placing steel-tipped wooden stakes at high tide, sinking the Mongol Dubhai Khan’s fleet.

During the Vietnam War, many of the channels between the islands were heavily mined by the navy of the United States, some of which pose a threat to shipping to this day.

The surrounding land region of Halong City is rich with high grade coal deposits, and is operated by the Vietnamese government.