“Chả giò” (or Nem Rán in the North) is one of the most popular traditional Vietnamese food, literally meaning minced pork roll.

The most common English translation of “Chả giò” is spring roll, though this is just a fancy name since the food has nothing to do with spring.

The main ingredients of a roll of “chả giò” are commonly seasonalground meat, mushrooms, and diced vegetables such as carrots andjicama, rolled up in a sheet of moist rice paper. The roll is then deeply fried until the rice paper coat turns crispy and golden brown. The ingredients, however, are not fixed. The most commonly used meat ispork, but one can also use crab, shrimp, sometimes snails (in northern Vietnam), and tofu (for vegan chả giò). If diced carrots and jicama are used, the stuffs inside the rolls are a little bit crunchy, and match well with the crispy fried rice paper. Nevertheless, the juice from these vegetables can soon cause the rolls to soften after only a short time. To keep the rolls crispy for a long time, mashed sweet potato or mung beans may be used instead. One may also include bean sprouts and rice vermicelli in the stuffing mix, yet, this is a rare practice. Eggs and various spices can be added based on each one’s preference. 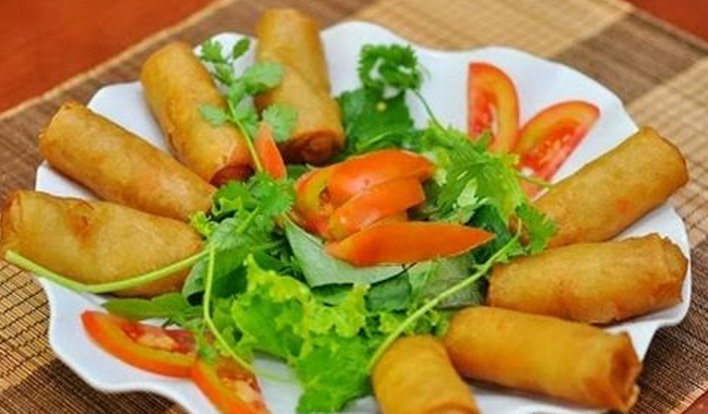 “Chả giò rế” is a rare kind of “chả giò” that uses “bánh hỏi” (thin rice vermicelli woven into a sheet) instead of rice paper. The stuffs inside the roll are the same as normal chả giò, and the roll is also deeply fried. Since the sheets of “bánh hỏi” themselves are not very wide, and the rice vermicelli is too easily shattered, “chả giò rế” rolls are often small and difficult to make. They are only seen at big parties and restaurants.

At some restaurants, “chả giò” is incorrectly translated in English as “Egg rolls”, and sometimes “Imperial rolls”. Egg rolls are significantly different from “chả giò”, as the wrapper is a wheat flour sheet instead of moistened rice paper. However, many Vietnamese restaurants in America have adopted the wheat flour sheet to make their “chả giò”, since it makes the rolls harder to shatter when fried, and the rolls stay crispy for longer time.