Da Lat, the gateway to the central highlands, is chalk to Ho Chi Minh City’s cheese. Life passes by at a rather more dignified pace at an altitude of 1500m, and the fresh breezes that fan this oddly quaint hillside settlement provide the best air conditioning in Vietnam.

The “Hanoi or bust” attitude, prompting new arrivals to doggedly labour between the country’s two major cities, no matter how limited their time, blights many a trip to Vietnam. If you want to travel the length of the country at some leisure, see something of the highlands and the deltas and allow for a few rest days, you’ll really need a month. With only two weeks at your disposal, the choice is either to hopscotch up the coast calling at only the most mainstream destinations or, perhaps better, to concentrate on one region and enjoy it at your own pace. However, if you do want to see both north and south in a fortnight, internal flights can speed up an itinerary substantially, and aren’t too expensive.

For the majority of visitors, Ho Chi Minh City provides a head-spinning introduction to Vietnam travel. Set beside the broad swell of the Saigon River, the southern capital is rapidly being transformed into a Southeast Asian mover and shaker to compete with the best of them. The city’s breakneck pace of life translates into a stew of bizarre characters and unlikely sights and sounds, and ensures that almost all who come here quickly fall for its singular charm. Furious commerce carries on cheek-by-jowl with age-old traditions; grandly indulgent colonial edifices peek out from under the shadows of looming office blocks and hotels; and cyclo drivers battle it out with late-model Japanese taxis in the chaotic boulevards.

Few tourists pass up the opportunity to take a day-trip out of the city to Tay Ninh, the nerve centre of the indigenous Cao Dai religion. The jury is still out on whether the Cao Dai Holy See constitutes high art or dog’s dinner, but either way it’s one of Vietnam’s most arresting sights, and is normally twinned with a stop-off at the Cu Chi tunnels, where Vietnamese villagers dug themselves a warren stretching over two hundred kilometres, out of reach of US bombing.

Another destination easily reached from Ho Chi Minh City is the Mekong Delta, where one of the world’s truly mighty rivers finally offloads into the South China Sea; its skein of brim-full tributaries and waterways has endowed the delta with a lush quilt of rice paddies and abundant orchards. You won’t want to depart the delta without spending a day or more messing about on the water and visiting a floating market, which is easily arranged at Cai Be and Can Tho. 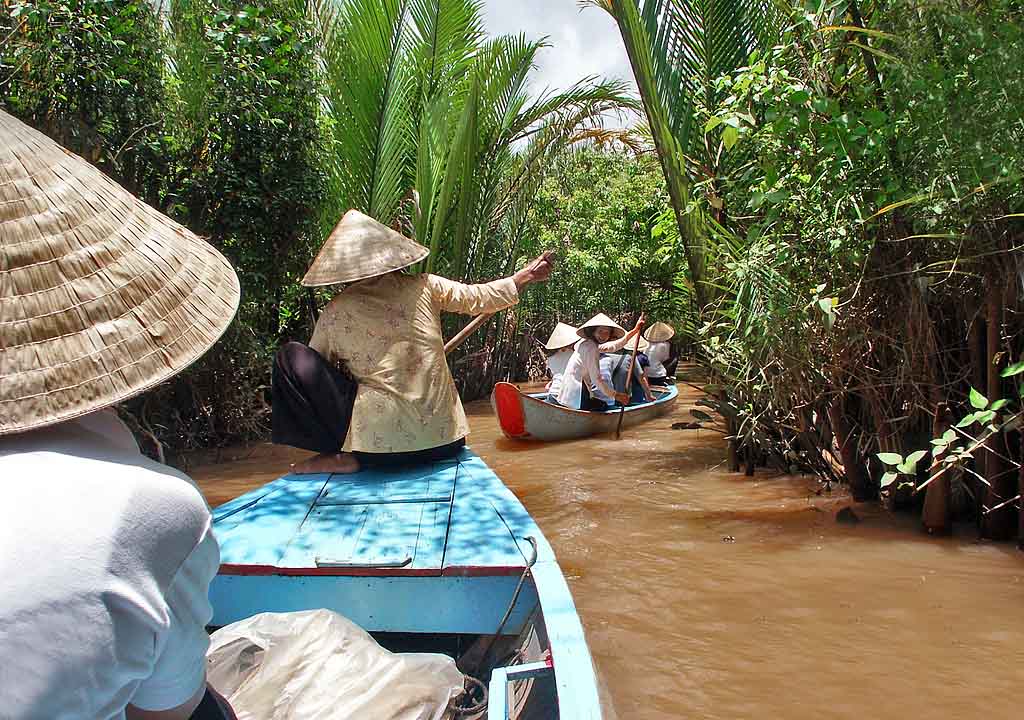 Da Lat, the gateway to the central highlands, is chalk to Ho Chi Minh City’s cheese. Life passes by at a rather more dignified pace at an altitude of 1500m, and the fresh breezes that fan this oddly quaint hillside settlement provide the best air conditioning in Vietnam. Minority peoples inhabit the countryside around Da Lat, but to visit some really full-on montagnard villages you’ll need to push north to the modest towns of Buon Ma Thuot, Pleiku and Kon Tum, which are surrounded by E De, Jarai and Bahnar communities. Opt for Kon Tum, and you’ll be able to visit minority villages independently or join treks that include river-rafting.

Northeast of Ho Chi Minh City, Highway 1, the country’s jugular, carries the lion’s share of traffic up to Hanoi and the north, though the recently completed Ho Chi Minh Highway offers drivers a tempting alternative route. For many people, the first stop along Highway 1 is at the delightful beach and sand dunes of Mui Ne, fast becoming one of the country’s top coastal resorts. Further north, Nha Trang is another beach resort that also boasts a lively nightlife, and the tirelessly touted boat trips around the city’s outlying islands are a must. North of Nha Trang, near Quang Ngai, Son My village attained global notoriety when a company of American soldiers massacred some five hundred Vietnamese, including many women and children; unspeakable horrors continue to haunt the village’s unnervingly idyllic rural setting.

Once a bustling seaport, the diminutive town of Hoi An perches beside an indolent backwater, its narrow streets of wooden-fronted shophouses and weathered roofs making it an enticing destination. Inland, the war-battered ruins of My Son, the greatest of the Cham temple sites, lie mouldering in a steamy, forest-filled valley. Da Nang, just up the coast, lacks Hoi An’s charm, but good transport links make it a convenient base for the area. From Da Nang a corkscrew ride over clifftop Hai Van Pass, or a straight run through the new 6km-long tunnel, brings you to the aristocratic city of Hué, where the Nguyen emperors established their capital in the nineteenth century on the banks of the languid Perfume River. The temples and palaces of this highly cultured city still testify to past splendours, while its Imperial mausoleums are masterpieces of architectural refinement, slumbering among pine-shrouded hills.

Only a hundred kilometres north of Hué, the tone changes as war-sites litter the Demilitarized Zone (DMZ), which cleaved the country in two from 1954 to 1975. More than three decades of peace have done much to heal the scars, but the monuments that pepper these windswept hills bear eloquent witness to a generation that lost their lives in the tragic struggle. The DMZ is most easily tackled as a day-trip from Hué, after which most people hop straight up to Hanoi. And there’s little to detain you on the northward trek, save the glittering limestone caverns of Phong Nha, the entrance to a massive underground river system tunnelling under the Truong Son Mountains, which includes Son Doong, discovered in 2009 and now thought to be the largest cave in the world. Then, on the very fringes of the northern Red River Delta, lie the ancient incense-steeped temples of Hoa Lu and, nearby, the mystical landscapes of Tam Coc and Van Long, where paddy fields lap at the feet of limestone hummocks.

Anchored firmly in the Red River Delta, Hanoi has served as Vietnam’s capital for over a thousand years. It’s a rapidly-growing, decidedly proud city, a place of pagodas and dynastic temples, tamarisk-edged lakes and elegant boulevards of French-era villas, of national monuments and stately government edifices. But Hanoi is also being swept along on a tide of change as Vietnam forges its own shiny, high-rise capital, throwing up new office blocks, hotels and restaurants.

From Hanoi Vietnam most visitors strike out east to where northern Vietnam’s premier natural attraction, Ha Long Bay, provides the perfect antidote to such urban exuberance, rewarding the traveller with a leisurely day or two drifting among the thousands of whimsically sculpted islands anchored in its aquamarine waters. Ha Long City, on the northern coast, is the most popular embarkation point for Ha Long Bay, but a more appealing gateway is mountainous Cat Ba Island, which defines the bay’s southwestern limits. The route to Cat Ba passes via the north’s major port city, Hai Phong, an unspectacular but genial place with an attractive core of faded colonial facades. To the north and west of Hanoi mountain ranges rear up out of the Red River Delta. Vietnam’s northern provinces aren’t the easiest to get around, but these wild uplands are home to a patchwork of ethnic minorities and the country’s most dramatic mountain landscapes. The bustling market town of Sa Pa, set in a spectacular location close to the Chinese border in the far northwest, makes a good base for exploring nearby minority villages, though a building boom has taken some of the shine off its laidback vibe. Southwest of Hanoi, the stilthouse-filled valley of Mai Chau offers an opportunity to stay in a minority village. Though few people venture further inland, backroads heading upcountry link isolated outposts and give access to the northwest’s only specific sight, where the French colonial dream expired in the dead-end valley of Dien Bien Phu. East of the Red River Valley lies an even less-frequented region, whose prime attraction is its varied scenery, from the vertigo-inducing valleys of the Dong Van Karst Plateau Geopark to the limestone crags and multi-layered rainforest of Ba Be National Park, and the remote valleys around Cao Bang, farmed by communities still practising their traditional ways of life.